7.3. Demand and supply in the money market

Demand for money is an economic aggregate equal to the real volume of national production, which consumers are ready to buy at any possible price level.

Today, economists define only the factors that motivate people to have money:

• the performance by money of a number of important functions, in particular, the function of the means of payment;

• existence of monetary meters on which the entire accounting system and all market information are based;

• use of money as a means of saving.

Based on the above, we can talk about the demand for a stock of money for a certain financial moment of time.

There are some differences in determining the content of factors that determine the parameters of the demand for money, representatives of the quantitative theory of money, economists of the Keynesian direction and the modern theory of money.

In fact, the quantitative theory of money is a theory of demand for money, in which the main attention is paid to determining the factors of their accumulation. The most fundamental value in the structure of this analysis is the justification for the direct relationship between the amount of money M needed for turnover and the speed of their circulation V, on the one hand, and the absolute price level P and the real volume of production Q, on the other. This dependence is fixed in the widely known in the economic literature Fisher's formula - the equation of exchange

Converting the equation, we get a formula that shows that the amount of money needed to provide goods and services is directly proportional to PQ - the nominal volume of production (nominal income) and inversely proportional to V - the circulation speed of the monetary unit:

Thus, the demand for money depends on the following factors:

• changes in the velocity of money (the higher the speed, the less money is needed);

• Real output (the higher the speed, the more money is required);

• the growing level of prices (the higher the price level, the more money you need).

Economists of this school believed that the speed V is constant and is determined by the number of payroll payments.

Keynesian model. For J. Keynes, the concept of the interest rate was the main one in the question of money demand. He considered money as one of the forms of wealth. The presence of money on his hands he associated with the property of their liquidity, but introduced three motives for storing money:

• the desire to keep some of the assets in the form of money for use as a means of payment;

• the desire to provide an opportunity in the future to manage part of the assets in the form of cash;

• The risk of holding assets in a different form.

The modern theory of money in its reasoning is based on a wide range of monetary aggregates M1 and M2: M1 - checks; M2 - checks + deposits on call. In this regard, it is necessary to take into account such factors:

• affecting the desire to have a certain asset in relation to money;

• a modern theory that rejects the demand for money for the three motives of J. Keynes.

The demand curve for money is shown in Fig. 7.

The supply of money is the desire of economic entities to lend a certain part of their assets in order to generate income. The supply of money (Figure 8) confronts the market with demand for money. At the level of a separate economic entity, the money supply depends on the change in the profitability of placing them in financial assets, primarily from the change in the interest rate: the higher it is, the more money will be offered on credit, and vice versa. 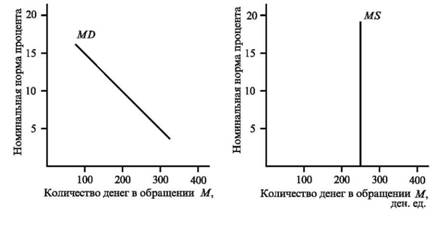 At the macroeconomic level, the supply of money has its natural boundary the total mass of money in circulation (for the M1 aggregate) and can not exceed it, no matter how the profitability of financial assets varies. Therefore, the supply of money under certain conditions can be considered a constant factor that does not depend on the dynamics of the interest rate. With an increase or decrease in the mass of money in circulation, the MS curve will shift to the right or left, remaining in an upright position, which confirms the independence of the total mass of the money supply from the interest rate.