Health and Medicines ... Memo How to Choose Vegetables ...

Memo how to choose the "right" and fresh vegetables 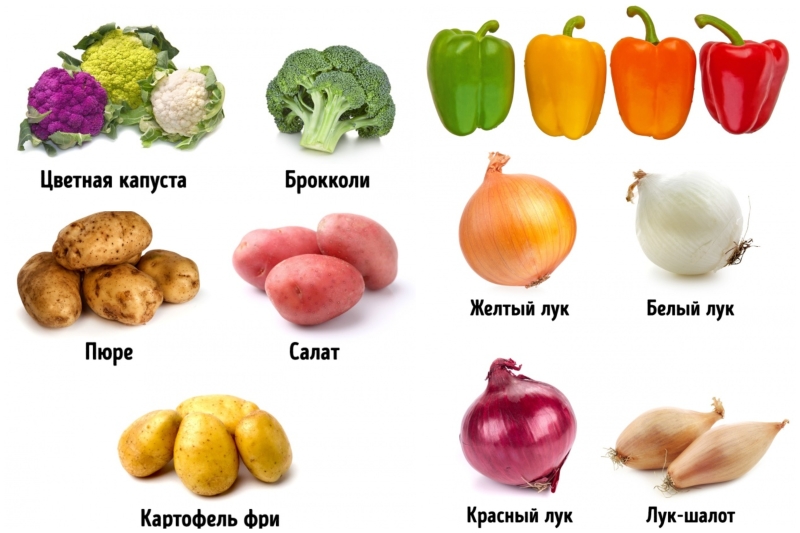 Vegetables is a culinary term for the edible part (for example, fruit or tuber) of some plants, as well as any solid plant food, with the exception of fruits, cereals, mushrooms, nuts and edible algae. The culinary term “vegetable” can be applied to edible fruits, which from a botanical point of view are berries. Vegetables are an important part of the human diet. The overwhelming majority of cases come from vegetables grown by agricultural enterprises on an industrial scale. Vegetables are grown by vegetables.

We buy vegetables almost every day, and almost no dish is complete without these healthy products. But can we choose them? Do you know which onion to choose for a salad or what to look for when buying mashed potatoes? And how is green pepper different from red?

We offer you a small memo with which you can choose the most delicious and "right" vegetable for your favorite dish. 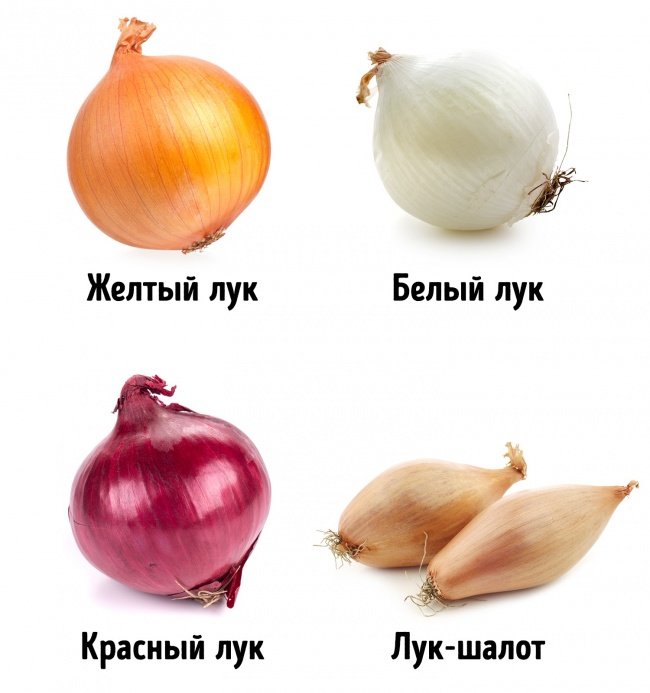 Onion (Latin Állium cépa) is a perennial herbaceous plant, a species of the genus Onion (Allium) of the Onion family (Alliaceae), a widespread vegetable crop.

White (sweet) onions . The sweetest of all varieties of onions. It is mainly used fresh for salads. White onion is widely used in Mexican cuisine for the preparation of sauces and hot dishes. The main disadvantage of white onions is their short shelf life.

Yellow onions . The most popular type of onion, which is suitable for frying, baking, cooking first and second courses, as well as caramelization, since it contains a lot of sugar. However, for salads it is still better to use other varieties of onions, as the rich aroma of yellow can “kill” all other tastes. It is his French who choose for their famous onion soup.

Red onion . Of all the varieties, red is the worst stored. Most often it is used in its raw form, since it becomes gray during heat treatment. It is great for sandwiches, pizzas and light sauces, because it has much less bitterness than yellow, and it looks prettier.

Shallots . Unlike onions, and even its “softest” varieties, shallots are completely devoid of bitterness; therefore, when stewed, it often acts as a side dish. In general, shallots are universal, they are used in any form: they are fried, boiled, marinated, and in China even chips are made of it. 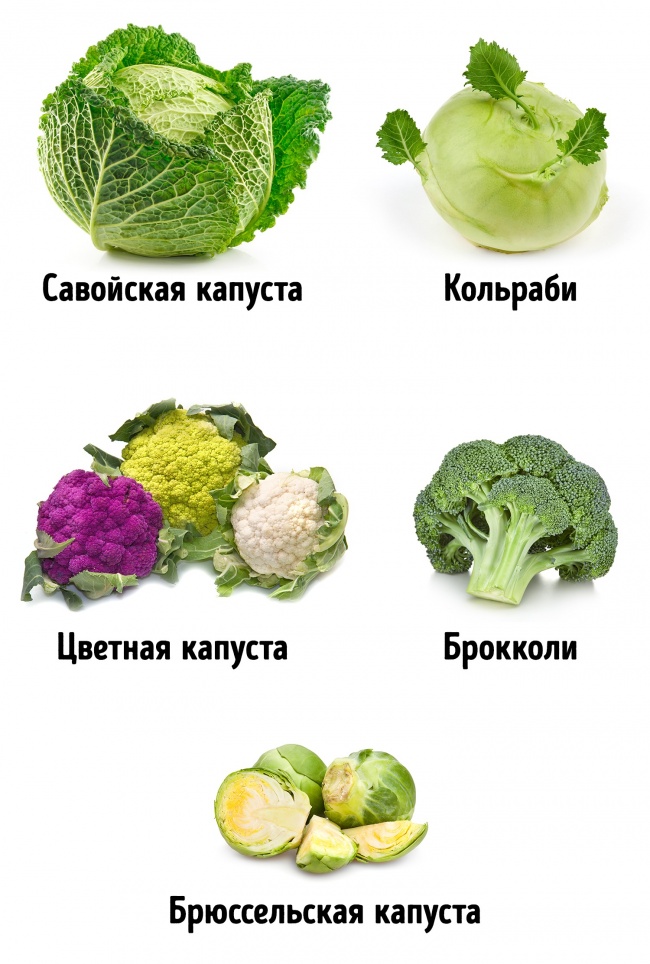 Cabbage is a variety of the species Cabbage garden, a common agricultural crop.

Kohlrabi . Translated from German, the word "kohlrabi" means cabbage-turnip. Unlike other types of cabbage, kohlrabi uses a stalk for food, which grows to a spherical shape. Cabbage contains a lot of vitamin C - more than in oranges and lemons, and to taste it resembles a white cabbage stalk, only without the characteristic bitterness. You can cook kohlrabi in any way, but it is most delicious in raw form.

Brussels sprouts . Small cabbage brussels sprouts can be prepared in a variety of ways - from blanching to baking. Despite the resemblance to white cabbage, Brussels spice has a slightly bitter nutty taste. If the heads of cabbage are not cut from the stem, then you can store it in the refrigerator in the vegetable compartment, and it is better to freeze the cut ones. This type of cabbage contains a large amount of B vitamins, as well as vitamins PP, C and mineral salts.

Red cabbage . Unlike its “pale-faced” relative, red cabbage easily tolerates long-term storage. In addition, it has 10 times more vitamin A and 2 times more iron. Use this cabbage mainly in fresh form, as if improperly prepared, it acquires an unpleasant bluish tint. However, in German cuisine, braised red cabbage serves as a side dish for many meat dishes.

Cauliflower . The most easily assimilated by the human body variety of cabbage, which also contains more than other varieties of this plant, useful substances, which makes it an ideal component of a children's diet. Cabbage can be subjected to any heat treatment, however, to maintain maximum beneficial properties, you should opt for blanching.

Broccoli Broccoli is the champion among the "brothers" in the amount of vitamin A. To preserve the nutrients, cabbage needs to be frozen, but the second time frozen cabbage loses all the nutrients. Use broccoli raw and blanched.

Savoy cabbage . It differs from the white-skinned unusual shape of the leaves, which do not have thick veins, and also contains more nutrients. This cabbage can be boiled, fried and stewed - in a word, used for all dishes in which we are accustomed to see ordinary white cabbage. When choosing, you need to pay attention to the shape of the head of cabbage - the rounder it is, the better and tastier the cabbage. 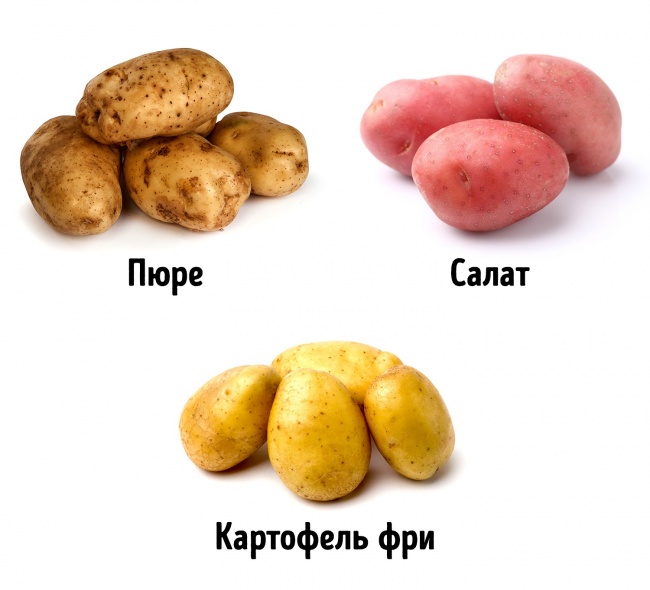 Potato, or Tuberous Solanum (Latin: Solánum tuberósum) , is a species of perennial tuberous herbaceous plants from the genus Solanum of the Solanaceae family. Potato tubers are an important food product. The fruits are poisonous due to the content of solanine in them.

Potatoes for frying and baking . For the preparation of fried potatoes, as well as fries and potatoes in a rustic way, varieties with an average and high starch content of 15% and above are suitable. They can be distinguished by white, yellow or brown peel and pulp, the color of which varies from white to yellow.

Potatoes for salads . For the preparation of salads and dishes in which the potato should keep in shape, you can use young potatoes of any kind, since it has little starch. As for the "ordinary" potatoes, here you need to pay attention to varieties with a reddish skin and pulp, similar to wax. The starch content in such potatoes is usually from 10 to 15%.

Mashed potatoes . The ideal potato for delicious mashed potatoes - one that contains a large amount of starch - from 20% and above. Such varieties, as a rule, have a white or brown peel and a very light, almost white flesh. The same potatoes can also be used for mashed soups, such as pea or pumpkin.

Tip . To determine the “starchiness” of potatoes, you need to cut the tuber in half, rub the halves together and let go of one of them. If the “free" half falls, then there is little starch in the root crop, and if it stays in place, you will see a product with a high starch content. 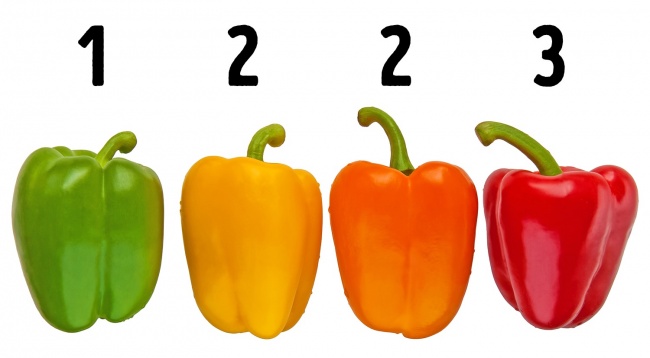 Cayenne pepper, Annual vegetable pepper (lat. Cápsicum ánnuum) - a type of annual herbaceous plants of the genus Capsicum family Solanaceae (Solanaceae), as well as its fruits. Agricultural vegetable crop. Varieties of chilli are divided into sweet and bitter. The latter, known as red pepper, is pungent with the alkaloid capsaicin. Varieties with fruits of sweet taste - sweet pepper. There are many varieties, for example, Bulgarian pepper.

Capsicum, or Capsicum, Vegetable pepper (lat. Cāpsicum) - a genus of plants from the tribe Capsiceae of the family Solanaceae (Solanaceae). Not to be confused with the genus Pepper (Piper) of the family Pepper (Piperaceae). The Latin name Capsicum is derived from lat. sápsa ae f. - a bag, in the shape of a fetus.

Green pepper is just immature red. Despite the fact that it is inferior to the "elder brothers" in the content of many substances, it has a lot of vitamin C - for example, half of one pepper is enough for the body to receive its daily intake. The taste of green pepper is more bitter than that of yellow and red, due to its immaturity.

Yellow and orange peppers . Such colors are just different periods of average ripeness of pepper. However, orange pepper is still sweeter than yellow, and there are more vitamins in it, since it is closer to the full ripeness of this nightshade.

Red pepper is the most expensive of all, since it is kept on the bed until it is fully ripe. It is red pepper that contains the largest amount of vitamin A and beta-carotene. Vitamin C in it is twice as much as in green. In addition, it has a sweeter taste than green and yellow, again, due to ripeness.