"Lost forever" photo, video of the consequences of the fire in Notre Dame de Paris

A fire broke out in the main cathedral of Paris on the evening of April 15th. The fire almost destroyed the Notre Dame Cathedral. In front of millions of eyewitnesses of the disaster, the cathedral’s spire collapsed, and the roof collapsed. Firefighters' access to the building is difficult.

There were no victims of the fire, the Ministry of the Interior said. “There will be nothing left of the building now,” the representative of Notre Dame Cathedral bitterly told reporters.

Violations during repair work are already called the cause of the fire: the cathedral is partially surrounded by scaffolding, the fire spread from the attic of the historic building. 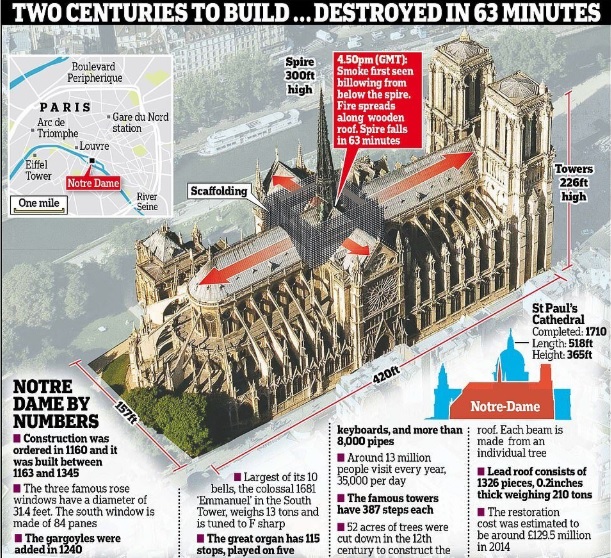 Quickly spreading through the scaffolding that surrounded the building, he spread to the steeple and famous clock. The collapse of the spire made people all over the world shudder.

Two thirds of the roof of the supporting structure of the building burned down. The flames raged literally inside the entire building and yet, despite the loss of the collapse of two-thirds of the roof, they managed to save the foundation structure along with the two towers.

The prosecutor's office of the French capital launched an investigation into the fire. French President Emmanuel Macron has already announced a fundraiser around the world, saying that to restore the cathedral - "this is our fate." 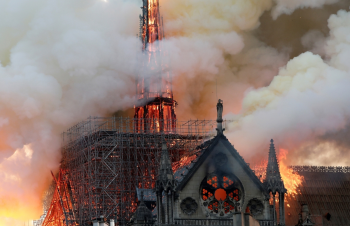 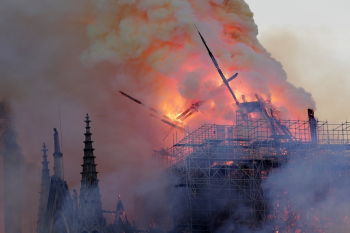 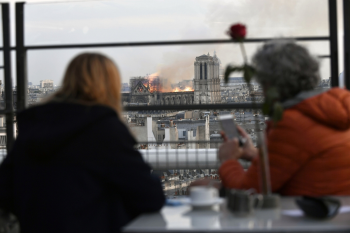 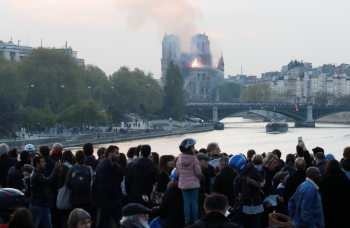 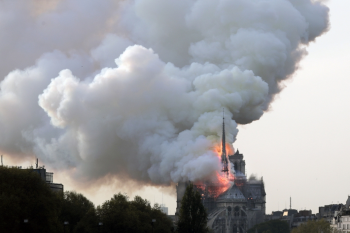 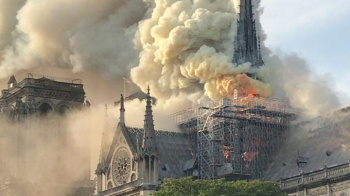 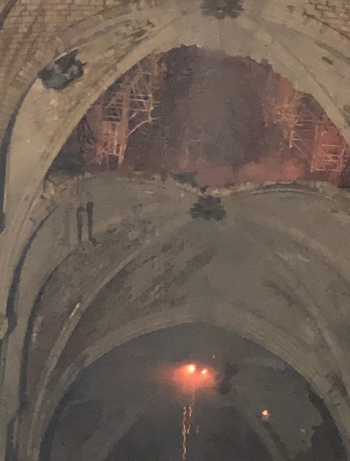 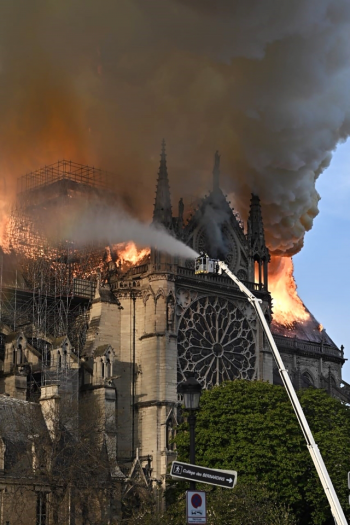 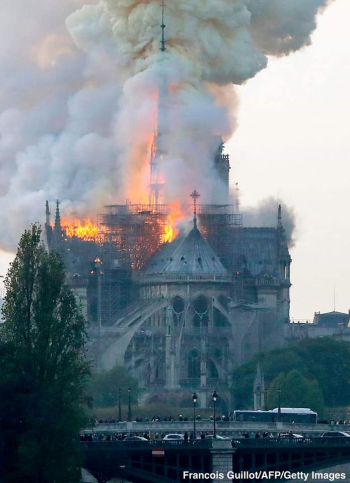 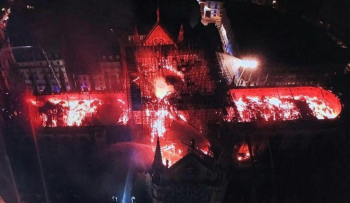 And down goes the Notre Dame spire. This is truly unbelievable.
(h / t @H_Miser ) pic.twitter.com/8HrQ7iAA8J 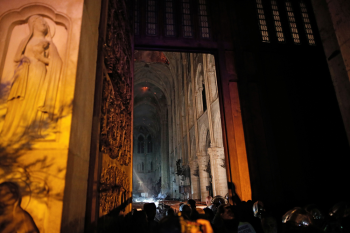 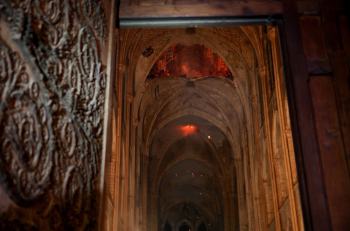 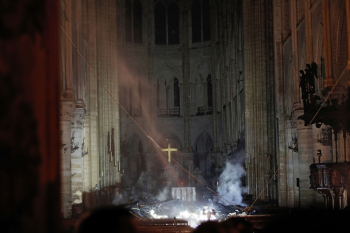 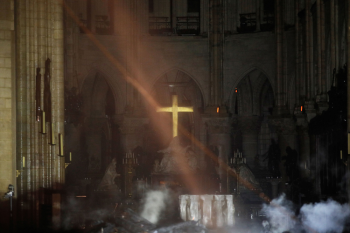 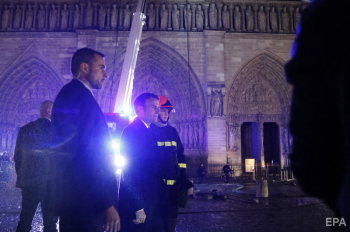 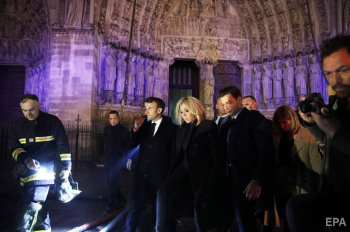 Images of the consequences of the monstrous fire in the Notre Dame Cathedral have already appeared.

They managed to extinguish the main source of ignition, but firefighters fought with fire in some areas until morning.

The frames made inside show that the altar and the altar cross have been preserved. The main structures of the building have survived. The photo shows how sparks are pouring from the vaults of Notre Dame behind the president.

The roof of the Notre Dame Cathedral has completely collapsed from massive fire. #NotreDame #France
pic.twitter.com/FK4167CJmE

"Almost nothing remained of the cathedral, the fire destroyed almost everything," eyewitnesses of the fire shared.

It is noted that firefighters who arrived at the scene of an emergency tried to put out the fire, but the height of the stairs did not allow this.

A fire swept over the left tower of the famous memo.

Notre Dame Cathedral, also Paris Notre Dame Cathedral, Notre Dame de Paris or Notre Dame de Paris (French Notre-Dame de Paris) is a Catholic church in the center of Paris, one of the symbols of the French capital. Cathedral of the Archdiocese of Paris. Located in the eastern part of the island of Cité, in the 4th city district, on the site of the first Christian church in Paris - the Basilica of St. Stephen, built, in turn, on the foundation of the Gallo-Roman temple of Jupiter. The Gothic cathedral was erected on the initiative of the Parisian bishop Maurice de Sully in the period 1163–1345. The altar was consecrated in 1182; the western facade and towers were completed in the second quarter of the 13th century. Since 1235, major changes have been made: chapels have been arranged between the buttresses of the nave (mid-13th century); increased transept size (architects Jean de Schel from 1250 and Pierre de Montreux until 1267); Chorus chapels (Pierre de Schel and Jean Ravi at the beginning of the XIV century) and large arkbutans of the deambulatory (Jean Ravi, beginning of the XIV century) were added. In the XIX century, under the leadership of Viollet-le-Duc, the sculptural part damaged in the Revolution was restored, the stained-glass roses of the nave were restored and a new spire was erected instead of the lost one.

One of the first large Gothic cathedrals with a six-edged ribbed vault, while preserving the characteristics of the transitional stage from the Romanesque style of Normandy: double lateral naves and the presence of stands (upper galleries). The western facade testifies to the mastery of architectural composition; the sculptural design of its entrance portals is a masterpiece of Gothic art. Portal of St. Anne on the right - the oldest (end of the XII century); the Doomsday portal in the center (1220-1230) underwent many restorations; Our Lady’s portal is north, on the left (beginning of the 13th century). On the south side of the temple, the portal (2nd half of the 13th century) of the transept is dedicated to the first Christian martyr, St. Stephen. Ancient stained-glass windows are preserved only in two roses of the transept and the rose of the main entrance.

The acquisition of fame and the salvation of the cathedral from destruction was largely facilitated by the eponymous historical (narrating about the 15th century) novel by Victor Hugo, published in 1831. He was badly damaged by the fire on April 15, 2019.